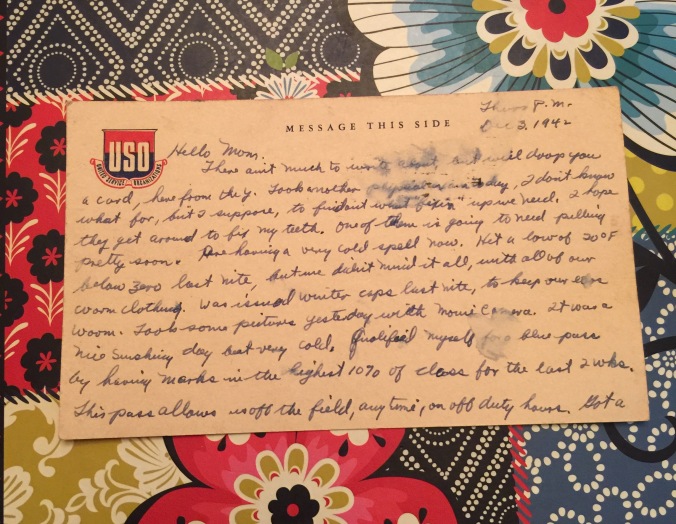 Prelude: Here is a post card written in 1942 from a man named Harold Sisson who is in Illinois. It’s to his mother who is in Almond, NY.  It’s written on a USO postcard and it seems that Harold is in the military.

There ‘aint much to write about, but I will drop you a card, here from the y. Took another physical on Friday, I don’t know what for, but I suppose it’s to find out what fixin-up we need. I hope they get around to fix my teeth. One of them is going to need pulling pretty soon. We are having a very cold spell now. Hit a low of 20 F last nite, but we didn’t mind at all with all of our warm clothing. Was issued a winter caps last nite, to keep our ears warm. Took some pictures yesterday with movie camera. It was a nice sunshiny day but very cold. Qualified myself for a blue pass by having marks in the highest 10% of the class for the last 2 weeks. This pass allows us off the field, anytime, on off duty hours. Got a card from Amy Housser the other day. Just a letter from H. Chapman today. They put on a show for us called “Chicago” here at the y last nite. It was very good.

An interesting letter from Herold. What’s weird is he says he’s at the y. Is he talking about the YMCA? He talks about physicals, and classes and being off duty, which makes me believe he is in some kind of military training. So, I looked up military locations in Illinois and only found the regular military bases and one program called the V-12 program where military classes were held at a university (IIT).  Anyway, wherever Herold is he seems to be doing okay. He got a blue pass and is in the top 10% of his class. His mom must have been proud, but he could have signed the letter a little more lovingly than “As Usual.”  Just another glimpse into the lives of people living during WWII. What do you think?