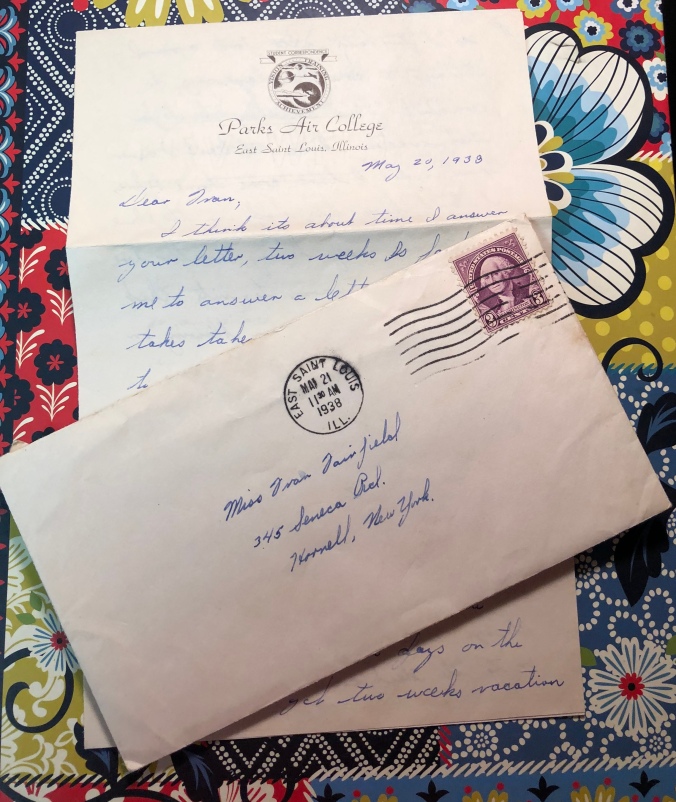 Prelude: Here is a letter written to Miss Frances Fairfield of Hornell, New York from someone who calls themselves “Meatballs.” It was written on May 20, 1938 on stationary that says Parks Air College, East Saint Louis, Illinois… Be reminded that I transcribe the letters as they are written with spelling mistakes and all.

I think it’s about time I answer your letter, two weeks is fast for me to answer a letter.  It usually takes me about a month to get around to answer my fan mail – but your special.  I just know you like to figure out puzzles.

It was a month from to-nite I’ll be leaving for home or Chicago.  I might go to Chicago to the airport for a couple of days on the way home.  I get two weeks vacation so, I probably will fool around Chicago a couple of days, cuz I couldn’t find anything to do for two weeks home. At least I never have when I have come home before.  I don’t know anybody in the place.

We are really having weather here now. It is so warm to-nite that I have to keep my fan blowing on my face to keep from dripping sweat on the paper.  I wouldn’t want you to think I was crying or sompthing.

I get through school this September 23rd. I don’t know where I’ll be going then.  It might be Chicago, Newark, Miami, Brownsville, or to the west coast, at least that’s where the school gets most of the student’s jobs. They have placed all graduates in the last four years except for four.  They also send quite a few to South America, but not me, I am not very keen on going there. Where I want to go is Miami on the coast, or anyplace, I don’t care, one place is just as good as another to me.  Most of the fellows get jobs before they leave school, so this summer will probably be the last time I get home for a while.

I get mad last night trying to study that dam Spanish. So, I went out and gave the night watchman a work out when I came in at four this morning. He isn’t much of a runner though, the sisy. I got 90 on the test today so, I guess it wouldn’t have done me any good to study anyhow.

Well, If I see you when I come home, I’ll tell you all about everything.  Be careful and take good care of everything.

PS. Don’t get me wrong, I think it means yours truly. Write sometime Fran.

Well, I’m guessing “Meatballs” is a man. He sounds like a friend that lived in Hornell and went away to some kind of Air Collage in Illinois.  I have a link below with more information on the collage. Meatballs seems like a fun kind of guy. He doesn’t seem to like Spanish, but he can’t be too bad at it if he got a 90 on his test. I’m guessing that he was a friend to Fran. This was the same time when Bob and Fran were writing each other. I believe Bob was finishing school in Brooklyn and then moved to Rochester. Fran was home living with her parents in Hornell, NY.  It seems she liked to write letters.

Here is a link to information on Parks Air Collage: https://en.wikipedia.org/wiki/Parks_College_of_Engineering,_Aviation_and_Technology

One thought on “Dear Fran (From Meatballs)”