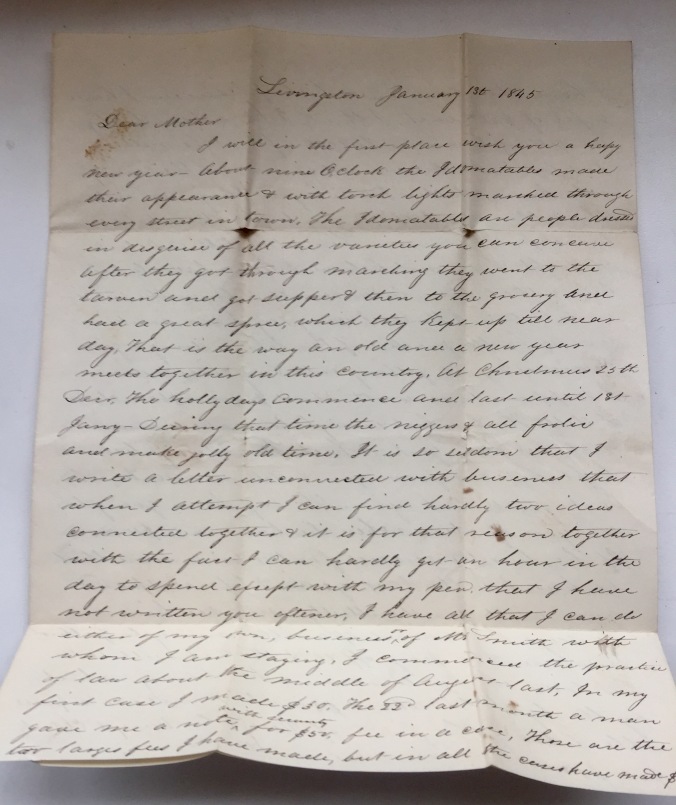 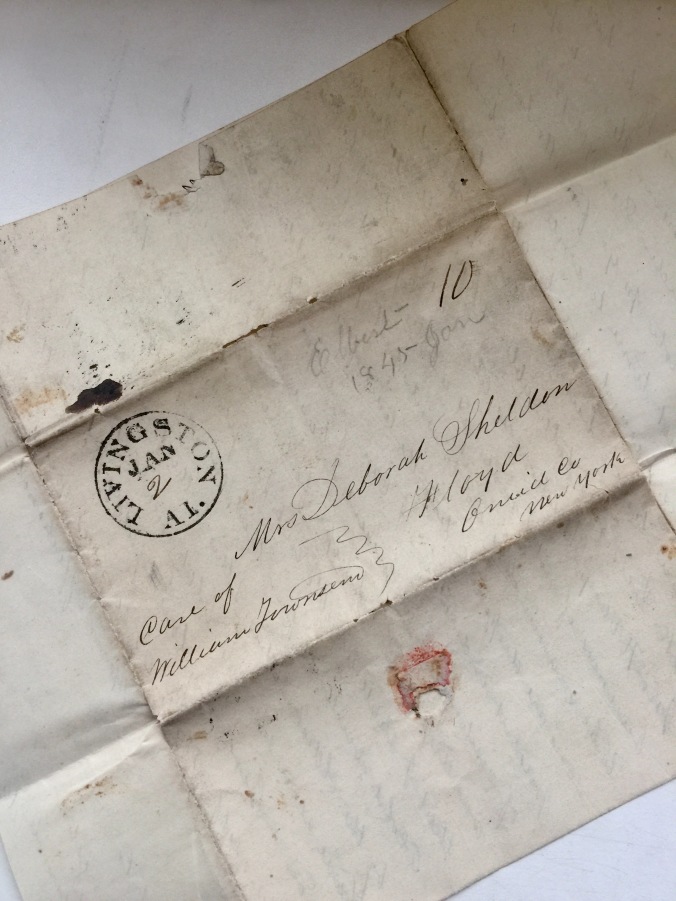 Prelude: This is a letter, I’ve been saving to post at the right time. It is a very old letter that was written on January 1st 1845. Yes, this letter was written before the Civil War and during a time when our country was deep into slavery.  It was written by a man named E.M. Nay. Mr. Nay was a lawyer and was living in Livingston, Alabama when he wrote this letter to his Mother who was living in New York under the care of a Mr. William Townsend. His Mother’s name was Mrs. Deborah Shelden. The letter looks to be have been written with a quill pen and has some unreadable words. Also, there is no envelope. They did not use envelopes in 1845 the letter was simply folded and sealed with wax.

I will in the first place wish you a happy new year. About nine O’clock the domatables made their appearance and with torch lights marched through every street in town. The domatables are people dressed in disguise of all the vanities you can conceive. After they got through marching they went to the tavern and got supper and then to the grocery and had a great spence, which they kept up till near day. That is the way an old and a new year meets together in this country. At Christmas, 25th Dec., the holy days commence and last until the 1st of January- during that time the N….rs and all foolier and make jolly old time.

It is so seldom that I write a letter unconnected with business that when I attempt it I can find hardly two ideas connected together, and it is for that reason together with the fuss I can hardly get an hour in the day to spend except with my pen, that I have not written you oftener. I have all that I can do, either of my own, of my own business or of Mr. Smith with whom I am staying.  I commenced the practice about the middle of August last.  In my first case I made $30, the 22nd last month a man gave me a note with security for $50, fee in a case. Those are the two fees I have made, but in all the cases have made $150.

I have three cases in which if I secure, I have a fee of $500 each.  I think I have been lucky in getting business, but this for it is nothing but luck, and there is not 12 men in the county who know whether I am a good lawyer or not.  About this way I spend my time- dress before breakfast of course- then study till 12 O’clock at night. I do not believe I have been to bed before that time in a month, and from the present indications, I think I may say I can make a living by the practice of law.  John is doing a good business and just getting into every circumstance. I suppose he is worth about $5000 or $6000 clear of debt. He has lost enough to make a man rich in New York, which he’s always been kept a secret from you and still would have, had he not got a start again.  He says he is going to see you alive when he has made $10,000.  If he has success for two years more that he has had the last year and life is spared. You will undoubtedly see him.  He says he cannot spare the money to go this summer and to pay off and see that it will take his loose change to secure his bribery, which by the bank takes about $3000 to purchase a pass able bribery. The firm of Renggoto, Vary & Clark gets $5000 in one case in this country.

John never writes me any news, if he has business he writes if not – never. Here is a specimen of his letters- London Dec. 27th 1845. Brother Elbert- The note for you from Mr. Larett is secure- I have not time to write you about the matters I want you to attend to previously you have terms – but will send in mail next week business to handle & am well. Your brother, John H. Nay. The above is about as he writes if he has business, if not I never get a letter, I doubt if he was to be married that he would write – perhaps he would. Your sons are dispensed to live the lives of old bachelors from present indications.  I can give you no encouragement of visiting you at present; I have not the means if was disposed, but I hope fortune may favor me that I shall be able in a few years.  We have here a cold winter that ever was experienced by the oldest fellows and this is the first winter I have ever seen snow in Alabama. My health is good.  Give my love to all and accept the same yourself. Write as soon as you receive this.

First, I must apologize for how choppy this letter seems, but it was very hard to read the writing.

I think it is a good glimpse into the life of a lawyer living in the south in 1945. I’m guessing that he was from England where his brother is. I wonder what happened to his father and why his mother is in New York and not with him or his brother.

Of course, the formality of the letter and all the talk about what money he made and was planning on making was interesting to me and gave us insight into his mindset.

And one last note, He did use the “N” word when referring to the people in the street. This alone gives us the reality of the time that he lived in.

I welcome your comments and opinions on this letter.